Removing the Obstacles To Learning

When Christina’s younger daughter, Edena (then 6), was diagnosed with dyslexia in 2009, she was determined to look for an intervention programme that could help her catch up with her reading age within the shortest time possible. She and her husband also decided to defer Edena’s Primary 1, as they saw how low her confidence was. They wanted to do what they could to give her the necessary interventions before the demands of the mainstream curriculum overwhelmed her.

Christina found the solution in the Davis Dyslexia Correction Programme (DDCP), a holistic approach to correcting dyslexia developed by Ronald D. Davis. He is also author of the books, The Gift of Dyslexia and The Gift of Learning. Being autistic and dyslexic himself, Ron figured out how to overcome his severe dyslexia and taught himself to finally read and enjoy a book without struggling at the age of 38. Ron subsequently opened a centre in California in 1982 to help children and adults overcome their learning difficulties.

The DDCP is an individualised, one-to-one correction programme given on an intensive schedule over 30 hours by a Davis Facilitator. It adopts a strength based approach by working with what a dyslexic can do, as opposed to what they cannot. Christina witnessed Edena’s transformation, going from hardly recognizing most words taught to being able to read a short paragraph by the end of the programme. This has not only met but exceeded Christina’s expectations.

For the next one year, Christina continued working with Edena using the Davis tools and techniques. By the time Edena returned to school a year later, she had a new found confidence. Now 17, Edena is pursuing her studies in junior college. This would not have been possible if not for the timely intervention and support from family, teachers and friends.

The journey from suspecting that Edena might have some learning difficulties, to seeking out professionals for advice, to researching and selecting the intervention programme, had been a daunting but enriching experience. While Christina has the desire to help other parents in similar situations, it is her conviction that to be in a position to provide guidance and support to other parents, she needs to have gone through the experience, successfully remediated the problem and be sufficiently well versed with the subject matter.

Hence she decided to dive into special needs education, first completing a Diploma in Disability Studies and later getting trained as a Davis Facilitator. Christina subsequently set up a Dyslexia Group on Facebook, with the mission to create more awareness about dyslexia and to help parents navigate their journey.

Contrary to what most people think, Christina shares that dyslexia is not a complexity but a combination of a few factors that can be tackled step by step. She explains that the symptoms of dyslexia are actually symptoms of disorientation. Disorientation is a state of mind where mental perceptions are not in agreement (i.e. distorted) with the true facts and conditions in the environment. When a dyslexic is sufficiently confused, he will react by disorientating spontaneously, thereby leading to perceptual distortion which results in mistakes made when reading, spelling or writing. Dyslexics therefore need a way to ‘turn off’ the disorientation at will.

But what caused the confusion? Basically, when a dyslexic encounters certain symbols, and all words are symbols (as are alphabet, punctuation marks, speech sounds, math symbols and numerals), they get confused by those symbols whose meaning they cannot picture. Dyslexics tend to think primarily in pictures, as opposed to thinking in words. Because of the way they think, whenever they come across symbols whose meaning they cannot picture, confusion sets in and once that threshold for confusion is reached, they will disorientate and mentally move around to ‘see’ from different viewpoints and angles in order to figure out what that symbol is.

To illustrate, take for example a simple math question – subtract 20 from 100. The majority of children can easily tackle this question, but not so straightforward to a dyslexic. High frequency or common sight words such as ‘from’, ‘by’, ‘the’, ‘if’, etc often caused confusion for dyslexics as they cannot picture the meaning of these words. A child may be able to recognise and pronounce the word ‘from’, but if he does not know the meaning, he would not know how to begin solving the math problem.

After much drilling and repetition to no avail to help the child understand the question, the child is then told by a well-meaning parent or tutor that whenever he sees such questions, he just needs to minus the smaller number with the bigger number. In so doing, the child is taught rote learning, rather than have real understanding or true mastery of the subject.

To resolve the confusion with the word ‘from’, the child needs to master the word in all its three parts ie what the word means (a picture representing the concept/idea of the meaning), what it looks like (the spelling of the word) and how it sounds (the pronunciation of the word). Once the child masters the word ‘from’, which means ‘starting with, beginning at’, the child can now think with the words in the question. So subtract 20 from 100 means he has to start with, begin at (ie from) 100, and then take away 20. Visually, he would be able to put 100 down on paper, followed by the minus sign and 20 below 100 and then do his workings to get to the answer.

There are 219 high frequency words that typically trigger disorientation for a dyslexic. These non-picture words make up about 75% of words on a page. By mastering these trigger words, the source of confusion will be eliminated and they will not trigger disorientation. Therefore, when we remove the reason why a problem exists, the problem ceases to exist!

In addition to her role as a Davis Facilitator and founder of the Dyslexia Group, Christina is also one of CaringSG’s CAREconnect champions who support fellow special needs caregivers. She has this to say to caregivers of children with dyslexia: “Dyslexia is a learning difference, not lack of intelligence. To receive a dyslexia diagnosis, the person’s IQ needs to be at least in the normal range. Ron himself was initially tested to have low IQ and was labelled as ‘uneducatably mentally retarded’ at the age of 12, but was later discovered to have an extremely high IQ of 137. People do not outgrow dyslexia, so do not wait to get help for your children. The earlier you identify the issues, the sooner your child can receive help. With the right intervention, a dyslexic can overcome their challenges and excel in life. No matter which stage of the journey you are at now, if you are looking for guidance or support, please do not hesitate to reach out to me.”

To be updated on CaringSG’s latest events and join your preferred caregiver support groups in our CaringSG Alliance Network (CAN), sign up as a CaringSG member and let us know your preference!

Even though 2022 has just passed, the pace for 2023 has already picked up quickly. It is amazing to look back on the work that CaringSG has accomplished in the past two years.

16 caregivers and 15 children were treated to a hearty tea brunch and family activities at Ya Kun @ Far East Square on 12 November 2022, kindly sponsored by Ya Kun Kaya Toast.

CaringSG participated at the Purple Parade for our first time on 29 October 2022 to celebrate abilities of persons with special needs, and promote awareness of our services for caregivers.

In celebration of the Mid-Autumn festival, CaringSG organised our Respite + Mid-Autumn Festival Celebration for 9 special families (16 caregivers with 13 children) on 10 September 2022.

On 8 Oct 2022, CaringSG and co-organiser William Blair organised Care4caregivers, a sporting event for children from 6 special needs families, to participate in simple workouts and obstacle courses.

Continue To Be Brave – By Board Member Dr Tan Jit Seng

I am a physician seeing Persons with Intellectual disabilities almost daily. If it takes a village to raise a child, it will take the entire society to chip in and raise a special one!

Every dollar goes a long way, in our mission to assist caregivers.

Fill up your email to receive updates from us.

Join CaringSG as a volunteer

Be part of our programmes and initiatives. 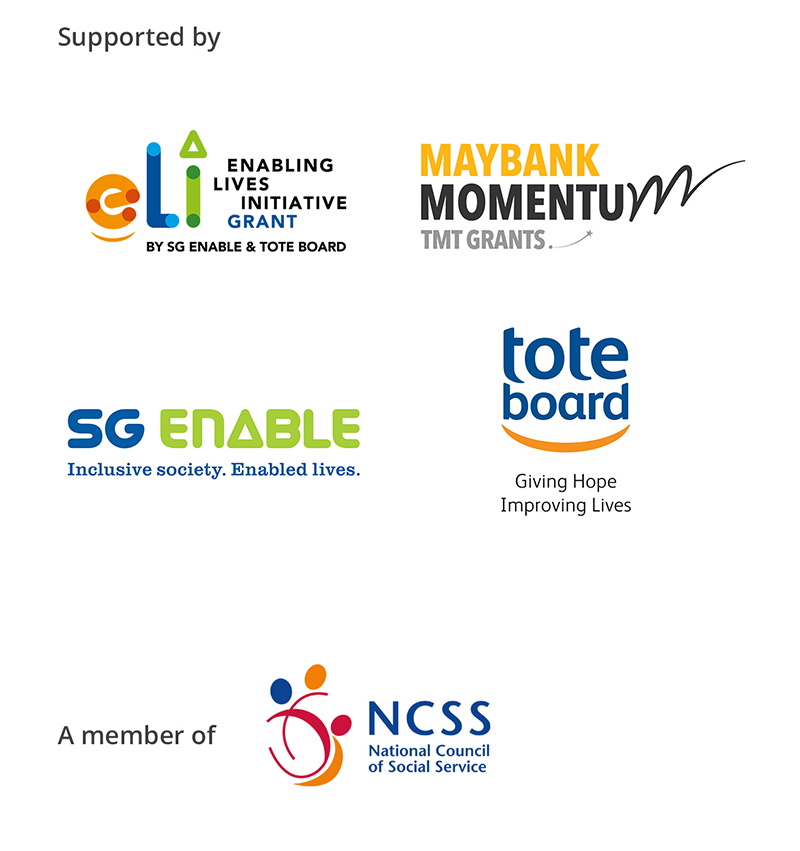